Last week while visiting Nova Scotia, we were often in the company of Pad’s girlfriend who was visiting at the same time. That was more happy coincidence than good planning but it worked out well because when he travelled by bus with the team she was able to tag along with us.

Never one to miss a chance to extoll the virtues of Nova Scotia, between Laura and I we pointed out the sights and history and lore from Citadel Hill to Peggy’s Cove to Grand Pre, reciting from memory those facts we knew and filling in other pieces with reasonable guesswork that made us sound informed.

Miss J. is a lovely, smart, outgoing young woman and product of Ontario’s education system, which means there are large gaps in her Canadian history database. No worries, ma’am. I’m here to bore you.

One afternoon we took her across one of the harbour bridges to allow her a more expansive look at Halifax and as Laura rightly described it, “a true working harbour.” Cargo ships, commuter ferries and Navy frigates mix with late-season pleasure craft on these waters. The business of shipping and receiving is a big one here; the sense of a call to defend a nation is pervasive.

At the crest of the bridge, we explained that to our right, looking down the harbour and out to sea is where the Imo and Mont Blanc collided in 1917 triggering the largest, man-made, non-nuclear explosion in this planet’s history, killing more than 2,000 people.

And to our left, we said, was Bedford Basin. And that remarkable ice-free inner harbour is where convoys gathered during the Second World War to prepare for the crossing of the North Atlantic. Remembrance Day wasn’t on my mind at that moment. But it is now. 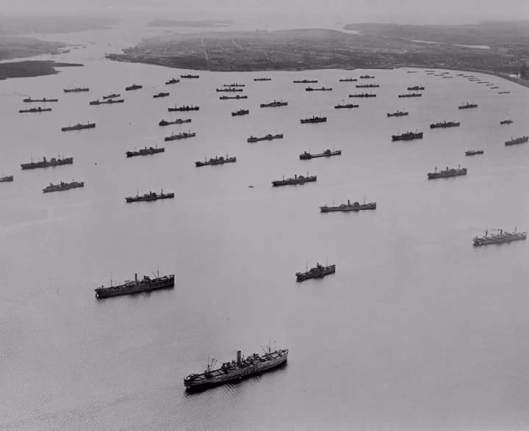 An Allied convoy assembled in Bedford Basin, NS, preparing to cross the ocean during The Battle of the Atlantic.

We take so much for granted – and I thought about that this morning when I worked out with my friends and bantered after in the locker room. We live in a miraculous land of plenty that has become what it is by virtue of its people.

Lots of countries are rich in resources and have similar or better climates and nice natural trade routes. But there’s only one Canada and only a relative handful of nations that can pretend to be as peaceful, prosperous, democratic and promising as this one.

Those are not empty words.

I grew up and came of age in and around Halifax. At the time – being from rural Nova Scotia – I thought the place was Toronto or New York. I know better now.

Halifax is small and mostly working class, a place where people know their local history and celebrate it. Much of the city could use some fresh asphalt and a coat of paint, but its charm is undeniable.

It’s thankfully unlike southern Ontario, where the urban sprawl starts east of Oshawa and one anonymous suburb blends into the next. Ajax. Whitby. Pickering. Scarborough. North York. Markham. Vaughan. Brampton. Toronto. Etobicoke. Mississauga. Oakville. Burlington. Hamilton. From the air, it looks like one massive place. Because it is.

Not so Halifax. Trees and sea and a smattering of communities give way to a modest urban hub, small in size relative to Toronto (less than one tenth the size) but punching way above its weight class in regional economic  heft. You know Halifax when you see it. No one ever said that about Vaughan.

And Halifax’s most distinguishing feature, its greatest resource, its source of pride, its font of history, glory and heartbreak, is the ocean. And every time I stand on its harbour front, I think of the history – some gruesome and some glorious – that has unfolded here.

The Battle of the Atlantic may have been Halifax’s finest hour. Few Canadians realize or understand that the Germans brought the war right to Canada’s doorstep – outside and sometimes even inside that harbour. In the Gulf of St Lawrence. Off Newfoundland (which technically was not yet a province, but let’s not quibble over four years.)

The Battle of the Atlantic was the struggle to keep England and Great Britain alive. It was thousands of merchant ships travelling from Halifax to England in convoys trying to avoid German u-boats. Without that lifeline, the English may well have starved and certainly would have had no means to defend themselves. That’s no exaggeration.

Officers in gold braid may have drawn up plans for war in Ottawa and Washington and London. But it was in places like Halifax where the heavy lifting started.

About 75,000 Allied sailors and merchant sailors died at sea in the Battle of the Atlantic. 3,500 merchant ships were sunk – at the peak, four every day. Just digest that for a minute. That’s 120 ships sunk in one month. It’s horror beyond Stephen King’s imagination and it all passed through Halifax.

During the Battle, another 175 warships were lost as well as nearly 750 airplanes. The Germans lost about 30,000 men and nearly 800 submarines.

As a little boy in a rural community, I remember standing in cold, wet weather at a modest cenotaph under leaden November skies looking at sad old men in ill-fitting uniforms and being moved by their emotional reaction to private memories which I would never know.

Halifax was more than just the Canadian and Allied side of the Battle of the Atlantic. It was also where soldiers and flyers and sailors shipped out for duty. A retired city cop once remarked that it was a tough place to work when rounding up drunk young men who were having a few before heading off to war. Who would have the heart to rein them in?

Similarly, he said he had no heart to discipline those fortunate to get back from Europe – because Halifax was the first taste of home many had seen in years.

Halifax has no claim on Remembrance Day but it’s a place where you don’t have to look far to know what you’re remembering.

All day today, I’ll remember and I’ll be grateful to the men and women who did what seems unimaginably brave to me, and created a country where my kids are free to study, play, love, work and celebrate life. I will never stop being grateful for that alone.

And Halifax will be at the front of all my recollections.