Some end of the long weekend this and that . . .

Our house is in a quiet neighbourhood. Nothing much ever happens. Occasionally the kids at a nearby pool get a little loud for an hour, or someone has a once-a-summer backyard party that goes into the night. But, pretty tame. We all smile and roll with it.

So yesterday I’m out in the yard cutting, mulching, edging, fertilizing and more. A relatively new neighbour – they’re been there about a year – calls hello over the fence.

Chit chat. Nice guy. Oh, BTW. We’re having a party for my daughter’s first birthday tonight and … it might get a little loud. I wave him off. No worries my friend. Little girls and piñatas? How rowdy can it be? Don’t give it a thought. Enjoy the party.

So, seven hours later at 10:45p, Pad – who has to get up around 6a for work – comes down wondering when the pounding south Asian disco music – and the music was really, really bad – is going to let up. It was so loud that even with the windows and doors closed, we had to turn the volume on the TV almost halfway to full to be able to hear it.

The little girls apparently had a grand time, which gave way to the parents having a grander time. And on the nicest evening of the spring we had all the doors and windows closed and couldn’t sit out in the yard. If it had been Saturday night or Sunday night of the long weekend I’m not sure anyone would have noticed. Doing it on a Monday night seemed odd.

By 1110p, silence was golden as it turned out. But it did put me in mind of an episode of The Sopranos, where Tony had called off the purchase of a beach house but the guy who had agreed to sell to him was refusing to return the $200,000 deposit. Tony wanted his money. Tony resorted to Dean-Martin-based harassment techniques.

Tony got his deposit back.

I do not yet have Raptors fever but I confess the team has my attention. I have no emotional connection to the team and I don’t see one coming anytime soon.

The Blue Jays? I walked the floor with my newborn son in my arms watching them win a second world championship in 1993 and of such things connections are born.

The Leafs? I was born to this calling and I can’t get out from under it. But again, the playoff runs of the spring of 1993 and 1994 – the latter again bouncing Pad on my knee while the theme from Hockey Night in Canada ushered in the 5p start time in Alberta – is a wonderful memory.

The Raptors? Well, I still think the team nickname is among the stupidest in all of pro sports but they have built a winning team that is bigger than the sum of its parts. I wish them well but I won’t be going to Jurassic Park any time soon.

Mostly I hope they do well so my boys can cheer for a local team competing for a major championship. They – and their friends – have been denied that thrill for far too long. So, go Raptors.

Spring finally arrived on the weekend and after a Saturday afternoon and Sunday morning (of yet more) painting, the work crew moved outside to happily try and peel back the layers of winter wreckage and make the yard a livable space again.

Hanging baskets were hung. Annuals planted. Patio and walkway urns flowered, patio furniture and cushions well used. Lawns were cut and fertilized, garden beds were edged with gusto. And the patio was painstakingly rid of the annoying and ugly weeds that creep in between the stones and new jointing sand was swept into place.

On the best days, the back patio is 100 per cent an extension of our home. It’s like another room and we wander in and out and sit and chat and for this week and next, with the apple and cherry trees in bloom and the leaves popping on every other tree with that bright shade of green you only see at this time of year, it’s wonderful.

I often go out there with the intention of reading but more often I just sit and stare off – our house is positioned at the top of a horseshoe-shaped street – so when you look out the back you don’t stare into someone else’s kitchen, you look down the barrel of many backyards and lots of trees. 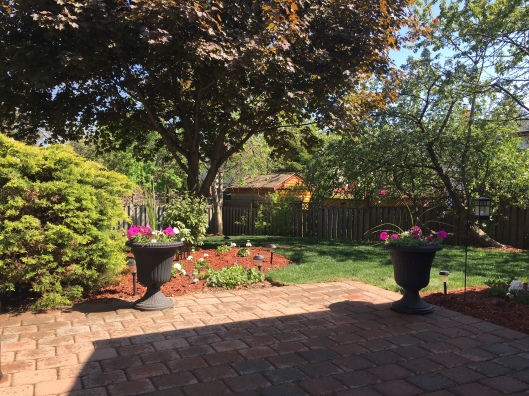 For an urban setting it’s easy to visually get lost and I happily do.

More yard work lies ahead but we really did break the back of the beast yesterday. It was a good day. And we could have danced to the south Asian dance beat last night, but we opted against it.

Chris is still looking for a summer job. If you are looking for summer help and need a tall, strong handsome 19 year old, let me know. In the meantime he has embraced his brother’s passion for the gym, working out more regularly than he ever has.

No, I haven’t bought a new bike. Stop asking.

Today marks three consecutive days for me without officially working out. I’m putting a caveat on “officially” because I did more physical work on Sunday and Monday than most people would do at the gym.

Funny thing is that before I lost some weight and took working out more seriously, there’s no way I could have done the things I’ve done in the last three weeks. Physical work is hard and six, seven eight hours of it at a time is a pretty good barometer of whether you’re in middling condition.

Yes, I was utterly bagged at the end of the day. No, I didn’t wake up feeling like I had been beaten with a stick.

Back to the gym tomorrow.