Parenting isn’t rocket science or brain surgery, but once it starts it’s a life-long commitment. Obvious, but true.

The front end is heavy lifting, the back end is more fine tuning. And after about 15 or 20 years – if you have any honest self awareness at all – you start to see how things are really going.

This will not be a soliloquy on the brilliance of my kids or our greatness as parents. There always things to do better, things we might have done differently. They still don’t know how to cook, do laundry, shovel snow, pickup clothes, or buy beer if there’s someone else in the house to do it instead. But, overall they’re better-than-okay kids and we love them.

No, today is about understanding that your kids will look at your example for a long, long time. The paths you choose, your conduct, your lifestyle, your generosity, honesty, work ethic, kindness, friends, choices. In short, your character. As the old saying goes, the way you behave when you think no one is looking.

Sweating it out today on a spin bike with 23 other people at 6am, I reflected a bit on this if only to distract myself from the heat of the room and punishing regime to be completed.

I have no doubt where some of my kids’ attitudes about family, teamwork, commitment, preparation and work ethic come from – their parents, their grandparents, the role models in their lives.

But my kids have become role models too. For example, there are a lot of things I can learn from my older son about fitness, self-improvement, commitment and drive. None of that is a secret to my readers.

But since I started working out regularly 10 months ago – and now that he is home for the summer – it’s opened up a whole new layer of conversation. I quiz him on what he’s working on. He might just say “leg day” and then it’s on me to drill deeper.

What does leg day mean in your workout? Leg day for me might be walking across the room with a couple dumbbells – not really, but you get the idea – where leg day for him an entirely different experience. And he will walk me through it and I realize his leg day would kill me.

He impresses me in that his passion for the chase has not waned one bit. He knows his primary weapon, his primary vehicle, is his body and he trains incredibly hard. What he lacks in skill he is willing to close that gap by being fitter, working harder, being more committed. These are not just words.

Last week I went to pick him up at the gym around 745p, after he had been at his landscaping job from 7a to 6p, then at BTNL from 6p onwards.

The sidewalk outside was wet on a sunny day, like someone had thrown down a bucket of water or hosed it down. Moments later Patrick came out and hopped in the car, in a good mood as always.

“Hey dad, if you had been here five minutes earlier, you could have seen me puke!” he said with a smile.

I asked if he was feeling okay; was he sick?

“No, not at all. We were doing sprints. Sometimes that happens.” 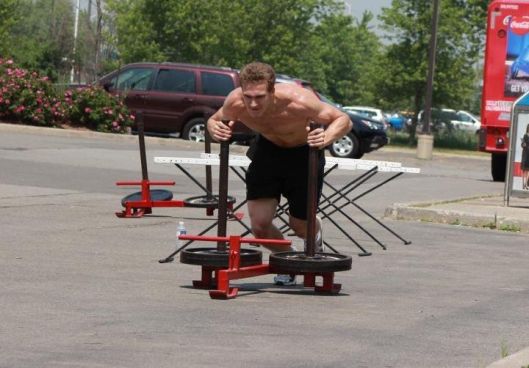 Everyone hates the Prowlers. A kid I know does them anyway.

That’s the difference between the effort he puts in and the effort I put in. I rarely feel like I’ve worked myself to the point of vomiting. For him, well, sometimes that happens.

There are a small number of guys I see where I work out who train like that, too. They are relentless and impressive. Some are pro athletes. Some are former collegiate types. But they are athletes, still and always.

I’m not the only one in the house feeding off his ethic. Chris continues to work out harder this summer and I have to think part of it is because he’s 6-5 and a little thin and would like to be a perhaps a slightly helftier version of himself, in his older brother’s shape.

And I think part of it is he sees his mom go out to work out four, five, six times a week, week after week, after putting in a full day and he sees what I’m doing with my aging carcass at 530a every morning and he’s seen for himself the benefit that I’ve gained from that.

And I take inspiration from Chris, too. He’s choosing to work himself hard, tackle some things that are hard. That’s all good.

It makes for a lot more laundry, but that’s a small price to pay. I have no doubt that fitness will always be a part of Pad’s life, just as it has been for his mom. I’m a latecomer, but I won’t be turning back now. And I think Chris is there, too.

Even at my advanced age, I have role models. Some of them are in the gym every morning with me encouraging me. I think if they can do this, so can I. Some are in my home.

If you want to find inspiration to do something difficult, if you need that inspiration, look around. It could be that you lead the way for someone else, too.